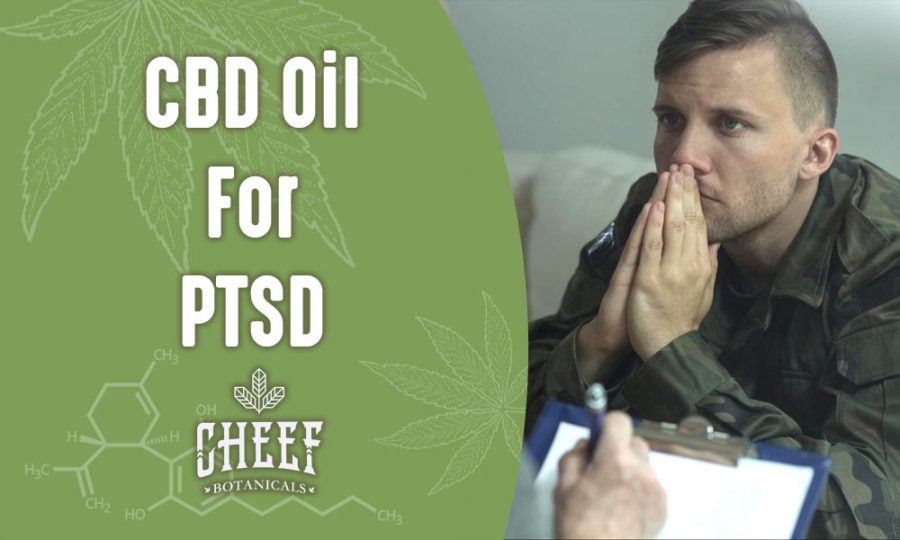 Post-traumatic stress disorder (PTSD) is a medical condition that occurs as a reaction to a stressful or traumatic event in a person’s life. It’s a mental illness and is usually the result of violent circumstances such as warfare, assault, car accidents, or abuse. Victims of PTSD can have a difficult time living a fulfilling and happy life.

Approximately 70% of American adults have experienced some traumatic event in their lives… About 20% of those adults will go on to develop PTSD.

Traditional therapies include various types of psychotherapy as well as medications to treat the various symptoms.

Using CBD for Post Traumatic Stress Disorder has been shown to be highly effective and is a safe, natural option to help patients live a better quality of life.

Most traumatic events can be emotionally processed and dealt with by adults. However, if the event in question is violent or disturbing enough or if there are preexisting and underlying conditions in the patient’s mental state, then PTSD may develop.

Approximately one out of every nine women develop PTSD throughout their lives. This makes them about twice as likely as men to develop the disorder. Interestingly, children are much less likely to develop PTSD following a traumatic event.

PTSD is a form of generalized anxiety disorder. Anxiety disorders are characterized by persistent and pathological feelings of fear and anxiety. Depending on the severity of the condition, it may become debilitating. It is more common to develop PTSD following interpersonal trauma. This means that if another person inflicted the trauma, such as physical or sexual assault than the victim is much more likely to develop the disorder.

Approximately half of all sexual assault victims develop PTSD. It is a serious disorder that can prove to be very challenging to properly treat and deal with.

A person must experience PTSD symptoms for at least one month following a traumatic event. The onset of PTSD symptoms may be even further delayed following the event in question. The symptoms are serious and potentially debilitating. They include:

The victim also usually displays reckless and self-destructive behavior. One of the most common conditions that occur with PTSD is alcohol and drug addiction. The victim uses these substances to numb the sense of pain and anxiety that accompany the persistent flashbacks and sense of powerlessness.

The treatment for PTSD generally consists of either therapy or medications. Therapy can occur in the form of psychoanalysis, cognitive processing therapy (CPT), or prolonged exposure therapy. All three techniques have varying rates of success and it may take a long time for the patient to show progress. Medications used in treating PTSD include:

All these medications have various side effects and not all patients respond well to them. The narcotic medications carry the additional risk of having the patient become addicted or dependent on them. This can lead to an exacerbation of underlying drug and alcohol problems and even death in the case of overdose. Because they intoxicate the patient, they may inhibit normal function in a person’s life.

The Role Between CBD and PTSD

Using CBD for PTSD can serve as a powerful alternative to various medications. It can also act as a natural complement to various therapy treatments. Because it has natural relaxing effects, it can open a patient up to feel more comfortable sharing with their therapist, counselor, or colleagues in a support group.

CBD is a plant-derived cannabinoid that works on cannabinoid receptors throughout the human body. These receptors are part of what is called the endocannabinoid system (ECS). This system controls various mechanisms in the human brain, including brain cells that process pain, anxiety, fear, happiness, and memories.

In fact, CBD has been shown to specifically work in treating various symptoms associated with PTSD. These include:

Other Benefits Of CBD Oil

CBD oil has a wide range of powerful benefits. It is a natural painkiller. It also stimulates activity in the endocannabinoid system (ECS). This system controls a wide variety of functions in the human body. These include conscious actions, such as speech or problem-solving, as well as unconscious actions, such as digestion and breathing. Because it stimulates the ECS, CBD contributes to a general higher level of health in the human body. CBD is also not psychoactive. This allows the patient to treat their disorder without having to worry about medication inhibiting their ability to function.

CBD has also been shown to reduce blood pressure and promotes cardiovascular health. The various symptoms of an anxiety disorder almost always result in a spike in blood pressure. Therefore, it is important to treat them with a medication that safely and effectively reduces hypertension. This, in turn, creates a cascade effect in the body where various systems and mechanisms return to normal levels following over-stimulation.

An episode of PTSD can trigger a “fight or flight” response. These responses result in the human body releasing various hormones that increase blood pressure, tighten muscle tissue, and cause rapid breathing. Using CBD for PTSD as a natural remedy to lower these fight or flight responses.

How To Use CBD Oil for PTSD

CBD should always be used under the guidance and discretion of a healthcare professional. If an individual is receiving traditional treatment modalities for PTSD, CBD may interact with the other medications that have been prescribed. In some cases, such as antidepressants or beta blockers, it can act as a natural complement and augment the effectiveness of the medication. In other cases, it may outright replace narcotic medications that have dangerous side effects.

CBD is also highly effective in helping the human brain build new neural connections. This is called “neuroplasticity”. This is vital in the process of learning new things or acquiring new experiences. PTSD is a cyclical system, where the victim experiences the trauma over and over. CBD can help the patient reroute various circuits in the brain to be more open to therapy treatment or group counseling sessions.

CBD is usually taken orally. You can find the best CBD Oil Drops, CBD Capsules or Vegan CBD edibles for PTSD in our online CBD shop. The body has an easy time metabolizing and breaking CBD down in the stomach. In its most basic form, it is an oil. In order to manufacture this form, the leaves and stalks of the hemp plant are compressed at high pressure.

CBD is well tolerated and has few side effects. Determining the correct dosage is best done with the patient’s physician and therapist. Purchasing CBD products with clearly demarcated milligram amounts is also crucial in determining this correct dose.

Below is a compiled list of scientific research and studies on Cannabidiol (CBD) and it’s potential use for treating PTSD.