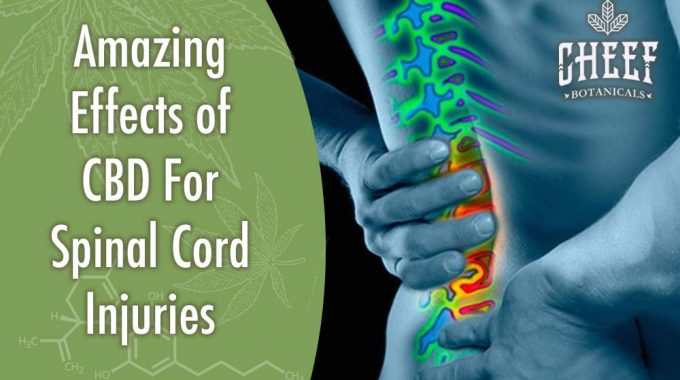 The spinal cord, along with the brain, is one of the two primary structures that make up the central nervous system (CNS). It is vital to human health and normal function. Any spinal cord injury (SCI) may result in a tremendous loss to the patient’s quality of life. They may also suffer from permanent pain, weakness, and changes in sensation both at the site of the injury and to any part of the body connected to the spinal cord. Severe SCI’s may even result in partial or total paralysis. For many years, it was considered medically impossible to recover from a serious SCI. However, recent developments in medicine and surgery have changed that outlook. There is also a growing body of research that shows how utilizing CBD for spinal cord injuries can help treat the symptoms associated with the condition.

The spinal cord is a long tube that extends from the brain down the length of the back. It is composed of neurons, the cells that make up the nervous system. Furthermore, it is crucial in two human functions: movement (the motor cortex) and sensing (the sensory cortex). It is essentially a thick power cord that carries electrical signals up and down the body. Serious damage to the spinal cord will disrupt these signals and potentially cause catastrophic symptoms.

There are almost 13,000 people a year who survive a spinal cord injury (SCI). The ten most common causes of SCI’s, in order from most common to least common, are as follows:

The vast majority of these are preventable as they occur most frequently due to risk-taking behavior or dangerous activities. As a result, over 80% of SCI’s are suffered by men, most of which are younger men. This is because younger men, on the whole, engage in more risky behavior than any other segment of the population.

What Are the Different Types of Spinal Cord Injuries?

SCI’s can be divided into two basic categories: traumatic and non-traumatic. Traumatic injuries occur when an event or attack causes sudden damage to the spinal cord, such as an accident or physical attack. These types of SCI’s are caused by mechanical forces. Nontraumatic injuries are the result of some kind of illness or condition that has caused damage over time, such as a tumor or bone disease that causes deterioration. Nontraumatic SCI’s can also be caused by a lack of blood flow, also known as ischemia</