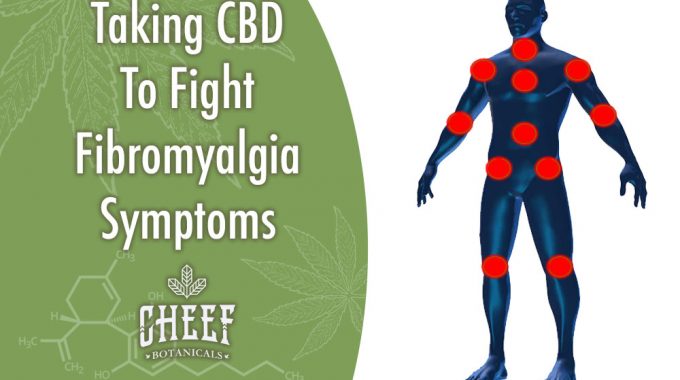 There is no known cure for fibromyalgia. Therefore, all current treatment focuses on managing the symptoms to improve the patient’s quality of life. Opioid painkillers used to treat fibromyalgia pain are potentially addictive, harmful, and even fatal if overused. A new extract of the hemp plant known as cannabidiol (CBD) has shown tremendous promise as a safe and viable alternative to these harsh painkillers.

Fibromyalgia is a health condition characterized by chronic pain throughout the body.  It is one of the most common pain disorders in the United States, with over 5 million Americans affected. Despite this, it is not very well understood by researchers.

Most clinicians agree that it is a neurologically-based condition. This means that the sensory centers in the brain likely amplify pain signals, causing the patient extreme distress.

The pain associated with the illness is substantial and can even become debilitating if the condition worsens.  The signs of Fibromyalgia can begin as insignificant but can persist.

What Are The First Signs Of Fibromyalgia?

It generally begins with an overall feeling of being unwell followed by pain.

The Primary Symptoms Are:

Research shows that the symptoms of pain from fibromyalgia are due to oversensitivity of brain cells known as glia. Glia cells are essentially the connective tissue of the nervous system.

Additional research also indicates that fibromyalgia may be an inflammatory disorder of the fascia or the fibrous tissue that encases various organs in the body.

Both of these scenarios would explain why the pain of fibromyalgia is so widespread and why there are so many tender points that clinicians must monitor to properly treat the condition.

Clinicians Monitor Sensations Of Pain At Nine Tender Points In The Body Located In The:

Mainstream Versus Holistic Treatments For Fibromyalgia

Fibromyalgia is a controversial condition. Some researchers claim that the pain of fibromyalgia is “all in the patient’s head”. Though it is a neurological disorder, it is important to remember that the pain experienced by the patient is very intense and very real. Furthermore, the majority of fibromyalgia patients, approximately 80%, are women. Consequently, there are some outdated schools of thought that claim that women are being hysterical and exaggerating the pain they are experiencing. Current imaging research has invalidated these sexist assertions and established facts about the disorder:

The imaging used is generally MR/PET (Magnetic Resonance/Positron Emission Tomography) scans. These are on the cutting-edge of medical imaging technology. This technology concludes that the disorder is neurological. In fact, one study indicated that patients suffering from fibromyalgia have inflammation all over their brain. This contributes to the searing pain that they experience throughout their body, particularly at the tender points discussed above.

Furthermore, due to the neurological nature of the disease, there is a correlation between fibromyalgia and anxiety/depression. This means that one condition exacerbates the other and they aggravate both sets of symptoms. As a result, a more holistic approach has proven to be more effective in treating fibromyalgia.

In the past, the condition was treated by simply prescribing the patient potent painkillers (usually opioids) to manage their pain. In many cases, opioids are necessary for patients experiencing the excruciating pain. However, using painkillers alone has limited efficacy. Current schools of thought indicate that there are three pillars to treating the condition: medications, physical therapy, and supplements: all used simultaneously.

Physical therapy (PT) can help increase muscle tone, bone density, flexibility, and overall health. PT generally focuses on specific exercises that target problem areas affected by pain disorder. Additionally, exercise naturally increases various chemicals in the body that can help induce feelings of happiness in patients such as experiencing “runners high” after miles of jogging. Most of these naturally-occurring chemicals are actually endocannabinoids working wonders in the body.  Taking supplements can have a similar effect on the body as exercise does, especially the ones that stimulate serotonin.

Some Supplements That Are Potentially Effective In Treating Fibromyalgia Are:

Antidepressant medications can be effective in treating the condition for some. If they are coupled with therapy or psychological care, including support groups for people suffering from fibromyalgia, then there is a strong possibility that the patient will experience some level of relief from the symptoms. Some patients also experience improvement in their condition with the practice of yoga or acupuncture.

Generally, most treatment modalities focus on a holistic approach, combining various strategies that best help the patient in question. It is best to combine traditional and holistic treatments like taking CBD supplements to treat Fibromyalgia symptoms.

Cannabidiol (CBD) is a naturally occurring member of the group of chemical compounds known as cannabinoids. It is found in the cannabis plant, particularly in the varieties that have low levels of THC (tetrahydrocannabinol) and higher levels of CBD. These are commonly referred to as hemp. CBD is distinct from THC in that it is not psychoactive. This means it will not intoxicate the patient if consumed and won’t get them “high”. Both of these cannabinoids have extensive medicinal value and can treat a wide variety of symptoms for a wide variety of conditions.  This is due to their presence all throughout the body.

The endocannabinoids are part of a body-wide network of neurotransmitters and receptors known as the endocannabinoid system (ECS). This ECS is crucial in various processes, including the modulation of pain, sleep cycles, appetite, depression, and reward centers in the brain. It is a communications system that drives human behavior and mood in profound ways.

New research suggests that fibromyalgia, as well as other sensitization syndromes such as migraines or irritable bowel syndrome (IBS), may have something to do with a condition known as clinical endocannabinoid deficiency (CECD). This is when the body has low levels of endocannabinoids. By taking CBD on a regular basis to increase levels of these endocannabinoids, a certain level of homeostasis is achieved in the body. Consequently, CBD has become a powerful tool in treating various symptoms of many ailments.

CBD Can Help A Wide Variety Of Fibromyalgia Symptoms, Including:

Many of these are the tell-tale signs of fibromyalgia. CBD is useful for fibromyalgia symptoms because it treats a variety of these related conditions all at once.

Forms Of CBD & How To Use Them

CBD’s default form is an oil. This is because the oil is extracted by applying tremendous pressure to the stalks, leaves, and stems of the hemp plant.  A legitimate CBD supplement company will then sell vials of this oil tincture with a dropper that administers a regular dose (usually between 15 and 30 milligrams).

CBD can also come in capsule and edible form. All of these forms of CBD are effective in treating symptoms. It is largely up to the patient to decide which form of the product they prefer. For example, if the patient suffers from nausea and/or vomiting as a result of the pain, then the tincture oil drops would be the best form as they would not have to swallow capsules.  It is often useful to vary the dosage to start off slow, and tinctures work great for this because it is easy to regulate the number of drops administered compared to other forms of CBD.

CBD is easily broken down by the body and well tolerated by nearly all patients. It is best to use the supplement under the supervision of a clinician. However, it has no major side effects and it is impossible to overdose on CBD. Most full-grown adults never experience any side effects and see benefits with two daily doses: one in the morning, then one at night.  The recommended dosage is between 15 to 30 milligrams at a time. If further relief from symptoms is needed, the patient can always increase the dose.  Each product has dosage information on the label.

It is best to use CBD products daily. Because of its wide profile of therapeutic benefits, it can complement the medications the patient is already taking. All in all, taking CBD for fibromyalgia is one of the best things a patient can do for their condition.