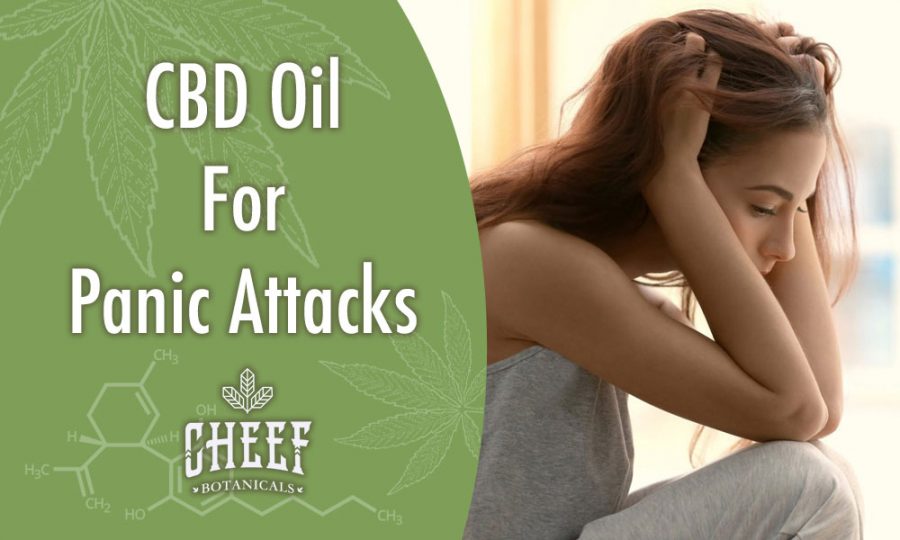 Anxiety is the most common mental illness in the United States, with approximately 40 million adults being affected by it each year. It is a highly treatable illness, although less than 40% of patients suffering from anxiety will seek out any treatment for it. Most people with anxiety just suffer silently. It is generally a chronic condition. Panic attacks are the acute episodes of a generalized anxiety disorder, also referred to as a panic disorder. These panic attacks can vary widely in severity and frequency. They have the potential to seriously harm a patient’s day-to-day function and decrease their quality of life. Traditional treatments for panic attacks include narcotic medications that are highly addictive and potentially dangerous. Cannabidiol (CBD) is a cannabinoid, a class of molecule derived from the cannabis plant, which can effectively combat panic attacks without the undesired side effects of narcotic medications.  Using CBD for panic attacks works.

Why Do I Get Panic Attacks?

Anxiety is a chronic mental illness. There are various types of anxiety disorders, one of which is known as panic disorder. It affects approximately 5% of the population. Panic disorder is characterized by the acute episodes, also known as “panic attacks”, that can be incredibly harmful to the people suffering from them.

These panic attacks can come suddenly and with little warning. There is the possibility of identifying “triggers” to these attacks, however it is not always entirely clear why or when these attacks will strike. Because of the unpredictable nature of these triggers, people suffering from panic disorder live in constant fear that they will suffer an attack. In fact, there have been instances of patients suffering a panic attack because they were worried about having a panic attack.

Mental illness is particularly damaging to a patient’s quality of life. It is a chronic condition that can damage relationships, professional prospects, and even a patient’s self-esteem or sense of self-worth. Using a remedy like CBD is critical in that it improves the patient’s overall quality of life and everyday function while treating the symptoms of their disease.

Symptoms of a Panic Attack

There is a continuing stigma regarding mental illness. Some people will say that a panic attack is “all in the patient’s head”. However, the symptoms and consequences of untreated panic disorder, and its acute panic attacks, are very real.

The symptoms of a panic attack include:

The symptoms of a panic attack are terrifying to the person suffering from them. If left untreated for long enough, the severity of the panic attacks will generally only increase. This in turn will cause more distress to the patient and can even destroy a person’s life, requiring treatment.

There are two primary traditional treatments for panic attacks: long-term use of selective serotonin reuptake inhibitors (SSRI’s) and the use of benzodiazepine narcotics. Benzodiazepines are essentially tranquilizers and have a high abuse potential. They are frequently used as recreational drugs. Both have extensive side effects.

SSRI’s are a type of antidepressant and are used to treat the chronic aspects of anxiety and panic disorder. Prozac and Zoloft are two widely known SSRI antidepressants. They are frequently prescribed to treat multiple conditions at once, like both anxiety and depression in a single patient. They may cause:

Furthermore, benzodiazepines are a class of narcotic drugs with powerful anxiolytic (anti-anxiety) effects. Xanax and Valium are the two most widely known benzodiazepine anxiolytics. They are used to treat the acute episodes of a panic disorder. However, they have even more severe side effects than SSRI’s and are profoundly addictive. Side effects of benzodiazepines include:

Once a patient is addicted to benzodiazepines, they are one of the most difficult addictions to treat. In fact, benzodiazepine withdrawals are potentially fatal due to the risk of having severe seizures. Any patient detoxing from benzodiazepines must do so in a controlled environment and under the strict care of health care practitioners.  The harms of prescription drugs often outweigh the benefits.  Using CBD for panic attacks is a great alternative.

CBD and its Anxiolytic Properties

Traditional treatments for panic attacks are full of unwanted side effects. In the case of benzodiazepines, they also contain the risk of profound and dangerous addiction. There is an alternative, however. Cannabidiol (CBD) has been shown to have powerful anxiolytic properties. Furthermore, it can be used to treat the more chronic aspects of panic disorder as well as the acute atta