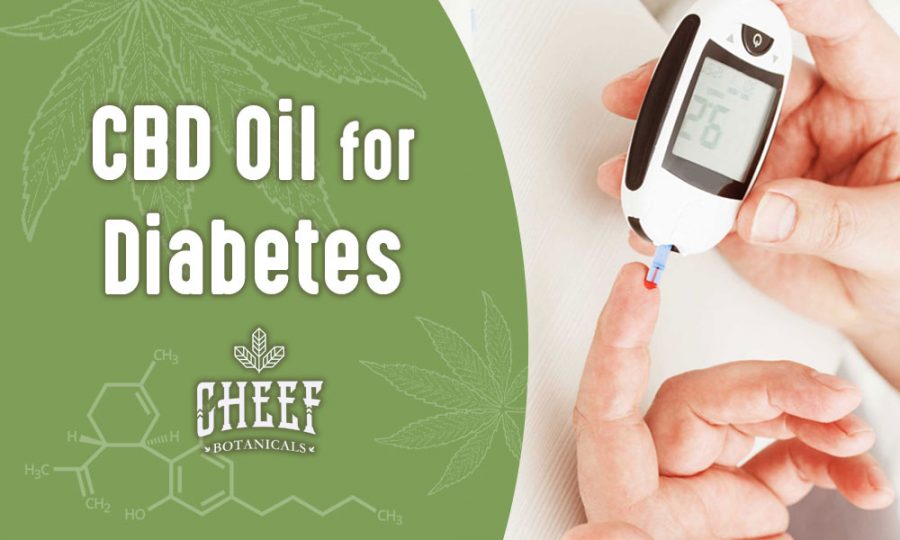 Diabetes is a disease that causes high blood glucose levels. Over time, too much glucose in the blood can lead to serious health complications, including damage to the kidneys and the eyes. Diabetes can also cause stroke and heart disease, and, in some cases, it can lead to loss of limbs. Diabetes can be managed, though, both with conventional treatments and with complementary treatments like full-spectrum CBD for diabetes.

Many diabetics have also discovered that CBD oil can be a useful complementary treatment for diabetes.

CBD is believed to be able to regulate blood sugar levels and reduce inflammation in the pancreas. If you have wondered if CBD could help manage your diabetes, here’s all you need to know about CBD oil for diabetes.

Diabetes is the term used to describe a range of diseases that involve the hormone insulin. Insulin is produced by the pancreas. It is a hormone that helps the body store and use sugar and fat. Diabetes occurs when the pancreas does not produce sufficient levels of insulin. Or, when the body does not react properly to insulin. There are three main types of diabetes. They are gestational diabetes, and type 1 and type 2 diabetes.

What Are the Causes and Symptoms of Diabetes?

With type 1 diabetes, the symptoms are likely to appear very quickly. Type 2 diabetes is likely to develop more slowly over time. However, with both types of diabetes, the early symptoms can be very mild. This often leads to the condition not being diagnosed until long-term damage to the body has occurred. Both forms of the disease have the same early warning signs:

Gestational diabetes is caused by a build-up of hormones during pregnancy. The underlying causes of the condition include being overweight, high blood sugar levels, and high blood pressure.

The exact causes of type 1 diabetes are unknown. It is thought that genetics is the main reason why people develop the condition. Other possible causes are environmental factors, including exposure to viruses.

There is also believed to be a strong genetic link to the development of type 2 diabetes. It appears to be inherited. There are also several type 2 diabetes risk factors that have been identified. They include obesity, lack of exercise and a poor diet. Aging is also a significant risk factor.

A 2015 study was conducted by Raphael Mechoulam of the Hebrew University in Israel. The research discovered that CBD reacts with cannabinoid receptors in the pancreas. CBD reduces inflammation and helps to regulate blood sugar levels. A reaction that could prove to be a useful treatment for both type 1 and type 2 diabetes. Another study published in the Autoimmunity Journal confirmed that CBD reduced the severity of diabetes in rats.

More research needs to be done into the use of CBD oil for diabetes. However, the anti-inflammatory effects of cannabidiol have been well-researched. Raphael Mechoulam’s research suggests that CBD oil may also have a regulating effect on the production of insulin.

CBD also has a range of other therapeutic effects. Some of these would be beneficial to people with diabetes. CBD could help with many of the secondary conditions that diabetics often develop. CBD is known, for example, to be beneficial for the treatment of cardiovascular disorders. It also improves circulation, and it helps to reduce blood pressure. All of which are common secondary complications for diabetics. CBD oil is not a cure for diabetes.

When combined with exercise and a planned diet, though, CBD oil for diabetes could help manage the condition.

How to Use CBD Oil for Diabetes

CBD is non-toxic and it won’t cause a high. It is one of more than 60 cannabinoids that are found in the cannabis and hemp plants. The cannabinoid in cannabis that causes the high is called Tetrahydrocannabinol (THC).

There is a range of different ways that you can take CBD oil for diabetes. The most common of these are CBD tinctures, which can be ingested or taken by placing a few drops under your tongue. Other CBD products include CBD capsules and CBD edibles. Smoking cannabinoid flower has also been a way to quickly consume CBD.

If you are diabetic, it is advisable to check with your doctor before you take CBD oil for diabetes. It has been proven that CBD can help regulate blood sugar level and reduce inflammation. CBD is not a cure for diabetes, but many diabetics have found that it can be of significant help in managing the condition.

How Much CBD Oil Should You Take for Diabetes

There are no official dosage guidelines for CBD oil. This is because CBD is not yet regulated by the FDA. The effectiveness of CBD oil for diabetes will be dependent on a range of factors. These include physical factors, such as your age, height, and weight. It will also depend on the concentration of CBD that is in the products that you use.

It is advisable to begin using CBD oil for debates at low dosages. You can then monitor the effect that it has and increase the dosage as appropriate. There are no known cases of CBD overdoses, but higher doses do not always mean more effective doses.

For the general maintenance of homeostasis, most people take between 20 to 25 mg of CBD a day. For mild cases of type 2 diabetes, a daily dose of 40 to 50 milligrams of CBD is common. For severe cases of type 2 diabetes, people usually take between 100 or 150 milligrams of CBD daily. Everyone is different, though, so we recommend that you start off with low doses and monitor your blood sugar levels to gauge the effect.

Possible Side Effects of Using CBD for Diabetes?

CBD has no known serious side effects and is considered safe to use. It is non-toxic, and it won’t cause a high. Most people experience no side effects at all when they take CBD. However, the reported side effects of CBD have included the following:

A report by the National Center for Biotechnology Information found that CBD inhibits the activity of some liver enzymes. This could affect the metabolism of certain types of drugs. It is important, therefore, that you take CBD 4 hours before or 4 hours after the use of any other medication.

Minor Side Effects of CDB

Other reported side effects of taking high doses of CBD include a dry mouth, a slight lowering of blood pressure, and a temporary feeling of light headiness. Some people also have reported feeling drowsy after taking large doses of CBD oil.

The side effects of CBD are rare, so if you do experience any, it is advisable to consult with a doctor before continuing to take CBD oil for diabetes.

Below is a compiled list of scientific research and studies on Cannabidiol (CBD) and it’s potential use for treating Diabetes.

There are various treatments for Diabetic Cardiomyopathy all having varying rates of success. However, there…