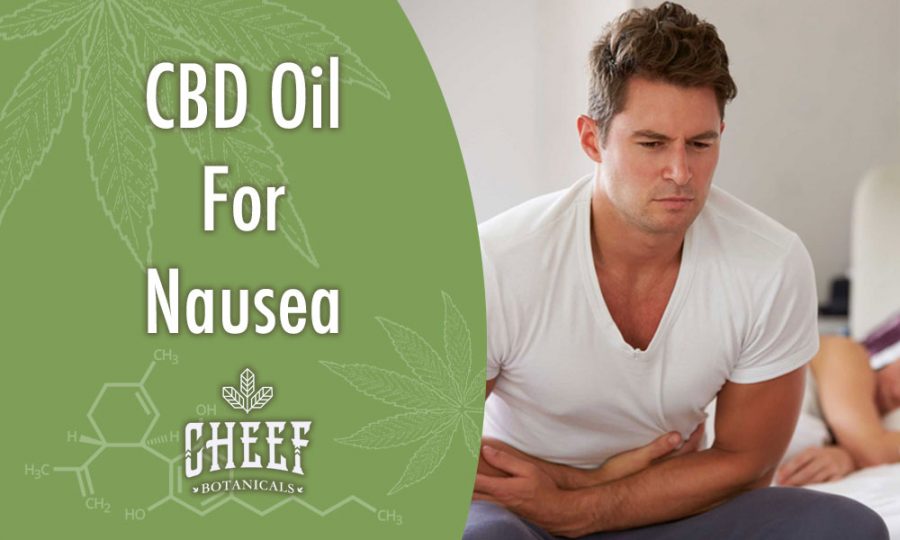 Nausea is the distinctly unpleasant sensation when a person feels the need to vomit. It is not a specific ailment itself and is usually an indication of an underlying medical condition. It is a common symptom and can sometimes lead to actual vomiting. The body uses the processes of nausea and vomiting to expel potentially harmful substances. However, nausea can frequently be persistent itself and simply remain as the continuous need to vomit without the body actually doing so.  The severity of  a case of Nausea can range from a mild annoyance to a debilitating condition. Though there are traditional medications to combat nausea, known as antiemetics, these frequently have extensive and undesirable side effects.  For some patients, the side effects of an antiemetic are just as bad as the nausea itself. Using Cannabidiol, or CBD oil for Nausea has been shown to be a viable alternative to traditional medications. It is safe and natural as well as being gentler on the body and having fewer side effects.

What Is CBD Oil?

CBD is a natural byproduct of industrial cannabis, also referred to as hemp. The processing of the cannabis plant also produces the more widely known tetrahydrocannabinol (THC). However, CBD is becoming the preferred medicinal component of cannabis for many people as it does not have the psychoactive properties of THC. This means that it does not cause the patient to get high and therefore potentially inhibit normal function and everyday life.

CBD’s fundamental form is CBD oil. This oil is produced from the leaves, flowers, and stalks of the cannabis plant. CBD oil is different than hemp oil, which is a byproduct of the compression of cannabis seeds. Furthermore, CBD belongs to a class of chemicals known as cannabinoids. These chemicals are also found in the human body where they make up a communication and control system known as the endocannabinoid system (ECS).

The ECS regulates various crucial functions in the human body. It is also responsible for regulating the intensity and expression of nausea. There are two primary types of receptors in the ECS, the CB1 and CB2 receptors. These are located both within the brain as well as all over the human body. CBD binds to both CB1 and CB2 receptors, though it does so in slightly different ways. In the simplest terms, CBD primarily blocks the CB1 receptors while largely stimulating the CB2 receptors. It also acts as an outside supplement to naturally-occurring cannabinoids in the human body to keep the ECS in balance and in a state of homeostasis.