CBD vs Kratom [A Thorough Examination] 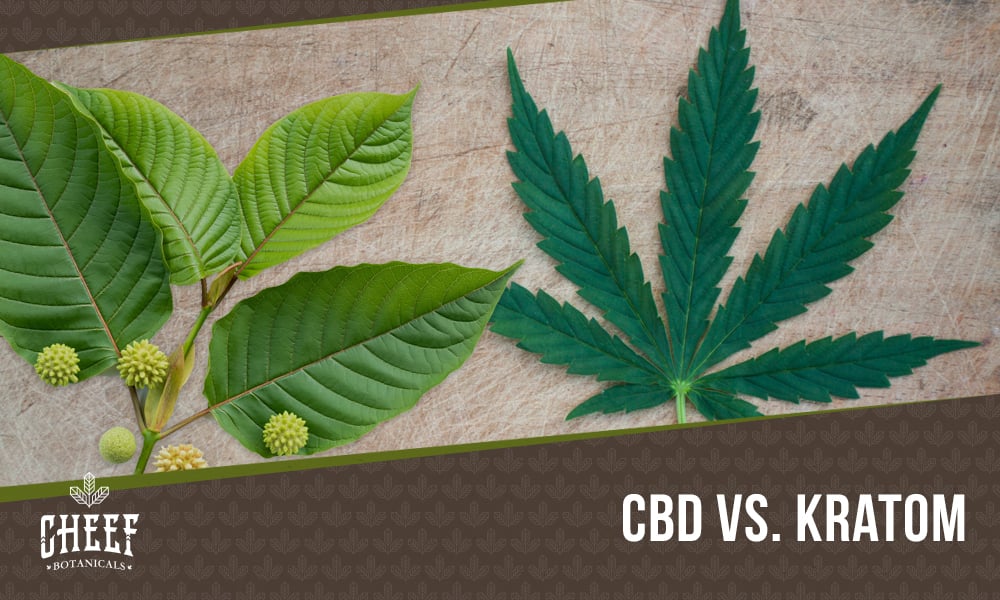 The world of natural remedies can get confusing sometimes. As CBD becomes more and more popular, consumers are looking for more natural remedies. Some people attribute Kratom as a possible candidate. So how does it compare to CBD? Both CBD and Kratom come from plants and offer a number of benefits. They are more opposite than similar though. Kratom is widely renowned for its use in helping those with opioid addiction overcome their ailment, but it also has addictive and psychoactive abilities of its own. CBD, on the other hand, has no addictive or psychoactive properties. Let’s explore CBD vs Kratom to clarity their similarities and differences.

CBD stands for Cannabidiol and it is one of many cannabinoids in cannabis. Its beneficial possibilities have been confirmed by the FDA, to a certain extent. In 2018 they approved Epidiolex, which is a CBD based prescription that helps people with a specific type of seizures. It seems as if this is only the beginning of CBD’s potential. As research continues, CBD’s importance only becomes more clear.

These receptors work with the ECS to help regulate the homeostatic balance of sleep, mood, appetite, digestive functions, inflammation, soreness, and much more. CBD has the ability to stimulate cannabinoid receptors which may promote the functionality of the ECS.

CBD became legal across all of the United States when the 2018 Farm Bill was passed. Which explains why we see CBD everywhere from your local gas station to movie theaters.

The entourage effect is when all of the compounds in cannabis work together to provide the maximum amount of benefits to the user. Broad Spectrum has all of the cannabinoids in cannabis, excluding THC.

Lastly, isolates are the purest form of CBD and do not contain other cannabinoids. The CBD market is not fully regulated, so it is important that consumers do their research on who they are buying from. Learn all about CBD facts here. 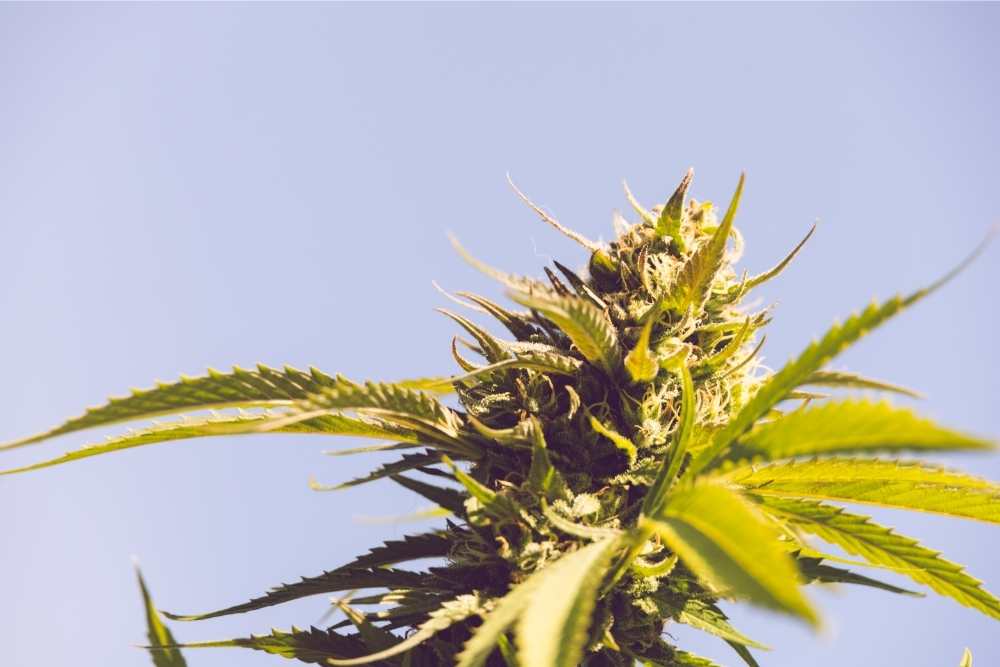 Kratom is a chewable leaf that comes from Southeast Asia. Although it can be extracted and turned into an oil, much like CBD oil. The easiest way to eat Kratom is to just chew on the leaf. Many cultures in Southeast Asia have used Kratom leaves in the way we use coffee, as a stimulant. That is because both coffee and kratom come from the plant family Rubiaceae.

Kratom has the capability to interact with opioids receptors in the brain. Because of this, Kratom has been studied as a potential replacement for opioids. It can help manage pain and soreness. The two most popular varieties of Kratom are Maeng Da, known as White Vein Kratom, and Red Vein Kratom.

White Vein Kratom is known to provide energy whereas Red Vein Kratom is more revered for its sedative qualities. Green Vein Kratom, which is rarer, is considered to be a middle ground between Red and White Vien Kratom. Kratom’s powerful psychoactive properties range from feelings of euphoria to hallucinations.

Both Kratom and CBD are from plants and both have a history in Asia. In fact, the cannabis plant and Kratom were used interchangeably in Asia long before either began to become as popular as they are now worldwide. Both the cannabis plant and the Kratom plant have psychoactive properties, although CBD by itself does not. THC is the active cannabinoid in cannabis.

There are a few similarities between CBD and Kratom. Both of these compounds have been used by consumers who are suffering from soreness. CBD interacts with your endocannabinoid system to provide overall wellness.

Remember, your endocannabinoid system helps to regulate inflammation and soreness, among many other things. CBD’s interaction with the ECS may help stimulate the system positivly.

Kratom contains a chemical called mitragynine. Mitragynine works the same as opioid drugs to relieve pain. Both CBD and Kratom have been discussed over as possible replacements for opioid addiction, which cause destruction to the human body.

The biggest difference between Kratom and CBD is that Kratom can get you high. While you cannot get any psychoactive effects from CBD alone, Kratom can give users a powerful trip if they take too much.

One study revealed that the vast majority of people who took Kratom for over 6 months developed an addiction. Also, the 2018 salmonella outbreak was connected to several Kratom products, which led to the FDA to crack down on the Kratom market with drastic force.

The 2018 Farm Bill reclassified hemp products, removing it from the schedule 1 drugs list. That made CBD and hemp products that contain 0.3% THC or less legal across the entire nation.

The 2018 Farm Bill made CBD and hemp-derived products legal across the nation. That means no matter which state you are in, CBD is legal for purchase. Kratom, on the other hand, is illegal in several states.

This is because the FDA has issued several warnings about the addictive properties of Kratom, and even have gone as far as to suggest its classification as a Schedule 1 drug.

No matter what state you are in, CBD is safe to purchase, although age and amount may vary depending on state laws. 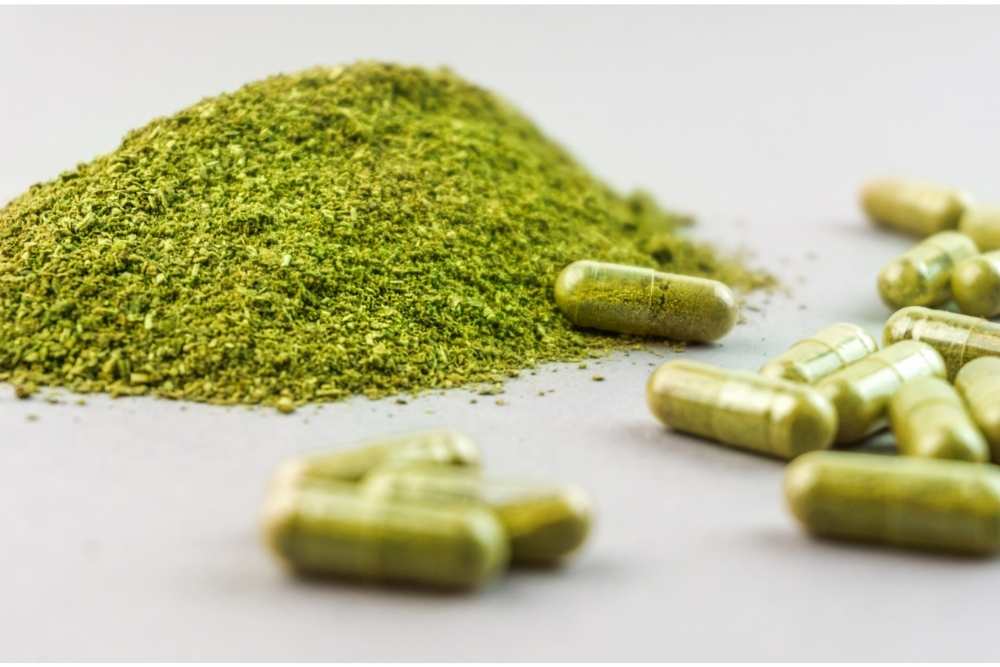 Reports of CBD having any negative effects are rare. However, there are some instances where mild side effects occur. Luckily, these side effects usually subside when the consumer’s body adjusts to the dosage. Side effects of CBD may consist of:

As for Kratom, according to WebMD and the CDC, it has caused overdoses. “I’m concerned [about kratom] because it has not been researched, and there have been some deaths,” stated Michael E. Schatman, PhD, assistant professor of public health and community medicine at Tufts University School of Medicine.

When comparing negative side effects of CBD vs Kratom, the list for Kratom is much longer with more severe symptoms such as:

In higher doses, Kratom may presents risks of serious side effects such as:

Final Thoughts About CBD vs Kratom

In conclusion, CBD and Kratom may have some similarities, but these products are not the same. CBD is much safer, non-addictive, non-psychoactive, and has little negative side effects. Kratom has caused overdoses and was linked to the 2018 salmonella outbreak, which has hurt its credibility.

With that being said, Kratom can still be useful. It has been used to relieve pain and help those addicted to opioids ween themselves off of the drugs. Consumers just must be careful when using Kratom because of the risks associated with the product.

CBD’s legality throughout the US makes it much easier to get as well. Kratom is illegal in several states, and many warnings have been issued about its capabilities and side effects by the FDA. If you are trying to make a decision between these two products, CBD is the better choice.  Check out this site.