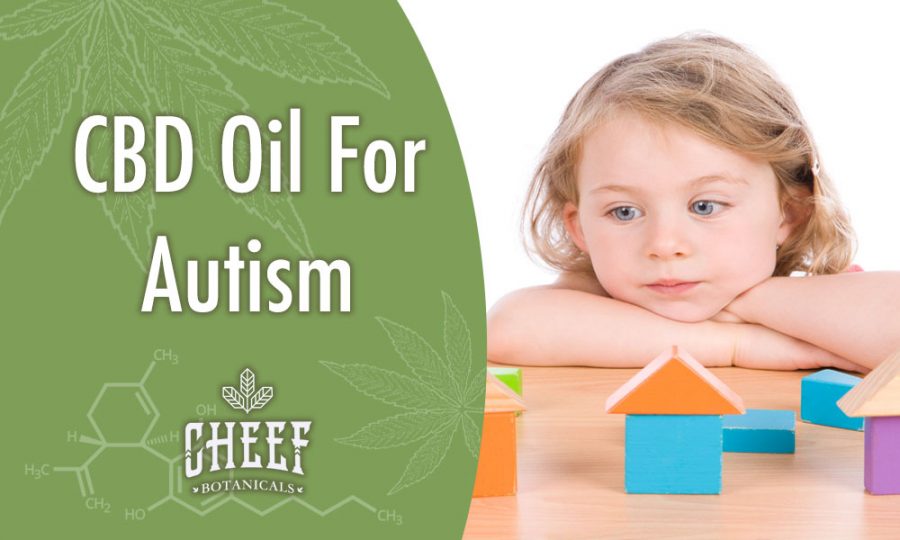 Autistic characteristics are different for each person.  Currently, there is no known cure for Autism.  So for many, the focus is on how to best manage the effects of this disorder.  Some patients and caregivers have turned to Cannabidiol (more commonly known as CBD) for help.  Overwhelming evidence and numerous testimonials highlight the benefits of CBD oil for Autism as well as for many other ailments.

There are two main chemicals found in Cannabis: Tetrahydrocannabinol (THC) and Cannabidiol (CBD).  CBD does not have any psychoactive sensations, that makes you get “high”.  Instead, it has calming properties and does not affect a person’s day to day activities except by reducing pain and fighting against numerous health complications.

Using CBD for seizures is one of the most beneficial new findings of those who are choosing to use it for their ailments.

CNN recently did a segment about a six-year-old girl named Charlotte Figi was given CBD to help with her frequent seizures.  As a young child, she was diagnosed with Dravet syndrome (a condition where seizures occur which can paralyze the body).

On a weekly basis, Charlotte would experience over 300 epileptic seizures per week, often rendering her unable to even move or eat.  Doctors were concerned with her future outcome.

With the lack of improvement with using prescription medications, Charlotte’s mom decided to look into CBD.  She started to give Charlotte CBD oil and saw a big change.  Her frequent seizures were down to less than one per week!

Autism plagues 1 in 59 children today.  The Centers for Disease Control and Prevention defines Autism as a developmental disorder created by a mix of genetic mutations and environmental factors.  Autism is a syndrome that resides under the umbrella of Autism Spectrum Disorder (ASD).  Med MD places other syndromes under this umbrella are classified as “Social Communication Disorders”.

A child with Autism will have trouble communicating.  They will also show difficulty in understanding what others think and feel.  This makes it hard for autistic children to express themselves verbally or non-verbally.  They may even be sensitive to sounds, smells, touches, or sights that seem normal to others.

Autism can be noticeable in the early stages in life.  Others may not have these typical signs until their environmental needs exceed their capabilities.  Issues caused within the brain don’t show the symptoms of Autism as observed behaviors do.

What Are the Symptoms Caused By Autism?

It’s important to know that Autism is an extremely complex disorder due to the range of issues that can affect the brain to cause it.  So Autism must be understood through its symptoms.  Common symptoms of Autism are:

People with Autism show mental impairment to a certain degree. Some are severely affected by this disorder while others are considered high functioning.  Certain problem areas of development may not show negative signs or symptoms of Autism, yet the inability to properly communicate or relate to others can be obvious indicators of the disorder.

The lack of development in these areas doesn’t affect ALL areas.  For instance, some diagnosed with Autistic show extreme talent in drawing, music, math, or memorizing facts.  This can lead to high intelligence scores in non-verbal areas.

Unfortunately, Autism cannot be detected through a blood test like other diseases or disorders can. Detection is done through observation beginning when a child is around two years old.

What are the Possible Causes of Autism in Children?

Providing quantifiable data to match the anecdotal stories found online is important.  Independent research is being done daily to explore how CBD can help Autistic kids.  The Center for Medicinal Cannabis Research (San Diego) is conducting a lengthy study about using CBD for Autism.  They are seeking to determine how Cannabis derivatives help reduce negative behaviors in those diagnosed with Autism and like disorders.

Medical research conducted by the Autism Research & Treatment Center shows that Autism comes from a genetic predisposition present in the brain that is triggered by environmental factors.  During the second trimester of pregnancy,  the brain on an autistic child starts to overproduce neurons.  This overproduction of neurons leads to improper connections between neurons which causes “misfires” in the brain.

– Parents cause Autism in children with bad parenting.

THESE ARE NOT IT!

Each child’s experience with Autism is unique. And can coincide with their timing of vaccinations. The mainstream analysis holds fast that vaccinations are not a cause of Autism (The American Academy of Pediatrics).

Either way, using CBD oil for Autism decrease the symptoms of those suffering from the disorder.  This alone makes it valuable and definitely worth a try for adults and kids alike!

CBD Oil For Autism: Can it Help Autistic Kids?

Parents of Autistic children who have used CBD have had great reviews. They all swear by the positive effects.  CBD is available in the form of tincture oil, capsules, and even gummy treats!

In the case of Charlotte Figi, using CBD oil for Autism significantly helped her battle the challenges she faced while dealing with Autism.  Fortunately, her case is not the only one being told on how CBD products greatly reduce seizures.

Quantifiable data to match the anecdotal stories found online is vital. Yet, at some point, the frequency of the testimonials suffices as quantifiable evidence.

With This Being Said…

More and more research is being done every day to explore how CBD helps children with Autism.  The Center for Medicinal Cannabis Research (San Diego) is conducting a lengthy study about using CBD for Autism.  They are seeking to determine how Cannabis derivatives can help to reduce negative behaviors in those diagnosed with Autism and like disorders.

Countless other studies have taken place studying the use of CBD oil for Autism, and undoubtedly, many more will be conducted in the near future.

Implementing CBD For Autism Into Child’s Treatment Has Shown the Following:

These results give hope for a better quality of life for children suffering from Autism.

Is CBD Safe For Children?

Stories like Charlotte’s have triggered the curiosity of parents who have Autistic children.

In 2017, the World Health Organization confirmed the use of CBD is, in fact, safe.

Autism & Seizures: What to Look for Before a Seizure Occurs:

Attending to the symptoms of Autism is important and there are limited treatment options available.  Using CBD for Autism can be a Godsend!

Everything You Should Know About CBD Oil for Asperger’s

CBD oil is commonly used in many people's everyday lives for general health and wellness.…