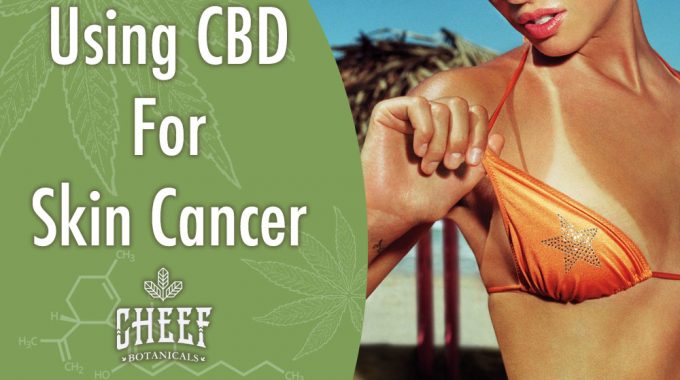 Forms of cancer that occur in skin cells are collectively known as skin cancer. Like all forms of cancer, skin cancer occurs when abnormal cells divide uncontrollably.  Cancer is serious and can be fatal. The conventional treatments for skin cancer include surgery, chemotherapy, and radiation therapy.  Extracts from the cannabis plant are beneficial for those diagnosed with cancer. They can lessen the side effects of conventional treatments like pain or nausea, and some studies even assert that CBD targets the underlying cancer itself, but further research is needed to prove it as true.  With this being said, using CBD for skin cancer definitely has potential to help many people.

Skin cancer is one of the most common forms of cancer. There are approximately 5.6 million new cases every year in the United States. That is more than the number of cases of breast, colon, prostate, and lung cancer combined!

There Are Three Basic Kinds Of Epithelial Cells:

The Three Most Common Forms Of Skin Cancer Are:

Skin cancer usually appears as a precancerous lesion first. This means that the lesion in question is a collection of abnormal cells that have not yet become full-blown cancer.

In the case of melanoma, this precancerous lesion begins as a mole (or nevus in the medical literature). A mole is simply a growth of melanocytes that is benign. If the mole becomes atypical, however, that means it might be mutating into a melanoma.  Therefore, it is important to be vigilant when examining your moles and know what to look for.

The ABCDE’s Of Melanoma:

Warning Signs For Any Kind Of Precancerous Lesion:

The number one cause of skin cancer of any type is exposure to the sun. Sun exposure that is cumulative is the main cause of SCC and BCC. Serious sunburns, particularly if the person is young, can result in melanoma at a later age. People with fair skin have lower levels of melanin in their skin. This means that they are more susceptible to contracting skin cancer due to UV ray exposure. An estimated 50-60% of fair-skinned people will suffer some form of skin cancer before the age of 65.

However, there are other causes of the disease. They include repeatedly being exposed to X-rays, exposure to certain chemicals (known as carcinogens), and scars that improperly heal on the skin. One of the most known carcinogens is tobacco smoke. For example, smoking tobacco products can lead to squamous cell lung carcinoma, a type of cancer that occurs in the lining of the respiratory tract.

How Can CBD Oil Help With Skin Cancer?

There are various cells in the body that have different jobs. This requires a process known as cell differentiation. This means that a basic, undifferentiated cell has to undergo a transformation (or a series of them) to become a specialized cell with a specific structure, metabolism, genetic code, and function. A cell that has the potential to differentiate into various types is known as a stem cell.

This process of cell differentiation is also involved in cellular division. This is how cells divide and multiply, allowing an organism to grow and/or change. Cancer is fundamentally a malfunction in this process because it makes cells divide uncontrollably, causing tumors.

Genes regulate the process by which skin cells remain normal or mutate into cancerous cells. This is controlled by a network of cannabinoid receptors in the human body known as the endocannabinoid system (ECS). This system can send signals to the genes contained in skin cells to either turn them on or turn them off. Cannabinoids that are natural in the human body, known as endocannabinoids, typically govern this process. However, if there is cancer present then this system malfunctions.

There is a growing body of evidence that cannabinoids mimic the body’s natural endocannabinoids quite effectively. This means that they can send messages to the skin cells via the ECS to regulate their healthy division and differentiation.

A study in the British Journal of Pharmacology concluded that CBD can indirectly activate receptors in the ECS (known as CB1 and CB2 receptors) and effectively control gene regulation.

This means that the CBD aids in the process of healthy skin cell differentiation. There was also some evidence to suggest that CBD could stop skin cells from becoming cancerous:

A similar study demonstrated that a cannabinoid known as anandamide can halt melanoma growth in a laboratory setting.

Research has demonstrated that CBD increases anandamide levels in the body through its interactions with the ECS. Another study from around the same time identifies a 90% decrease of skin cancers in mice who used cannabinoids for skin cancer.

How To Use CBD Oil For Skin Cancer

CBD oil can be administered to a patient in a variety of ways. There are tinctures, which can be squirted under the tongue for quick absorption via the mucous membranes. Tincture oil can also be applied directly to the skin for absorbtion.

CBD capsules and candy edibles are also available that work from the inside out.

Topical application means that the CBD oil would mainly interact with the upper levels of the epidermis. On the other hand, taking CBD orally will allow the compound to reach more throughout the body.

It is important to note that an oral route of administration would result in higher overall levels of CBD in the patient’s bloodstream.

What Are The Side Effects Of CBD?

CBD has minimal side effects. They include:

These side effects are extremely rare. The vast majority of patients never experience any of them. The most common is drowsiness and fatigue, but this is usually because a dose may be too high. In some cases, this is precisely what a patient may need if they decide to take the supplement at night to help them sleep. The other side effects are usually temporary and will wear off quickly as the body becomes used to the compound. Once, again, a lower initial dosage is ideal to avoid the small chance of side effects.

It is important to choose a CBD product that has properly delineated dosage amounts.  the dosage will be on the label of the product you choose. This will allow you to develop a CBD regimen to help treat and prevent skin cancer.  Usually 15-30 drops of tincture oil (15-30 milligrams) is the recommended dosage, but it varies depnding on the specific product selected.  Gummies and capsules both come with 30, so the dosage is the amount of CBD in the product divided by 30.

CBD is an important supplement to add to a cancer treatment regimen. Most full-grown adults can begin using CBD for skin cancer by taking their doses in the morning and at night. In more drastic cases, increase the dosages in 15 milligram increments. You may also use topical CBD at the same time as oral CBD forms. Either form of the medicine will result in a higher quality of life and very likely: a lower rate of skin cancer.

Cancer is one of the leading causes of death worldwide.  Every year, Cancer kills more than…

The Many Benefits Of CBD for Bladder Cancer